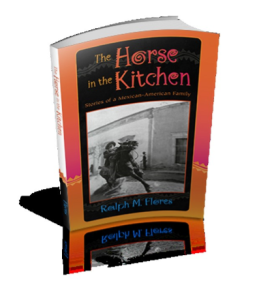 Originally published in hardcover by UNM Press in 2004, The Horse in the Kitchen won the American Book Award in 2005. Now issued in paperback by 48HrBooks, the reprint adds the autobiographical essay “A Father’s Tears,” exploring the machismo of the patriarch whose son discovers in his father a tenderness he hadn’t anticipated.  Americans considering ramifications of the border wall in 2019 will find a contrast with the experiences of Mexican immigrants portrayed in this fictionalized memoir.

What Rudolfo Anaya said in regard to the hard cover still holds true: The book is “a heart-warming story of one family’s struggles, survival, and eventual triumph. This immigration saga fits in the tradition of Barrio Boy and Y no se lo tragó la tierra. So readable you can’t put it down. It captures the history of the turbulent times” in revolutionary Mexico and in the U. S. in the early-mid twentieth century.